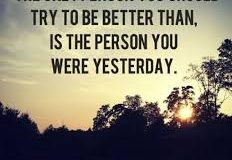 Last night we were at our one and only home track meet. They versed Dekalb and Summit. There was a boy in a wheel chair and I was watching him wheel around thinking he was there for moral support or something. The events went on and here came the boys 1600 run and he went to the line… I was thinking maybe someone would push him. Before I knew it the gun went off and away the boys went and sure enough there he went. That boy finished that 1600 mile race in 6 minutes 52 seconds using his arms the whole time. Get out of town! It was probably one of the most amazing things that I have physically witnessed. He crossed the line 2nd to last, and he finished with the biggest smile on his face and waited at the finish line for his teammate and congratulated him along with the other boys that finished before him. To tell ya the truth I don’t remember who finished first because I was so amazed at the sportsmanship that boy had. I couldn’t help but think this boy is an inspiration and he probably has no idea how much he impacts the peoples lives that see him. It took all I had not to run over and give him the biggest hug and tell him what an amazing race he had, but being a middle school boy I didn’t want to be creepy ya know.

Watching that race and seeing the fact that boy was out there for his team put a whole new meaning to what is exceptional and what isn’t. We are so blessed with such amazing kids who are very athletic and they both shine in there said sports. I like to think they have sportsmanship (they both have there days where they aren’t very sportsmanlike) We all have these days… I guess my only hope is that we all strive to be a little more like this boy and we put more impact on (our team) not on ourselves. Not just in sports but in life.

My new goal is to stop being so selfish and to start being more thankful for things in life. It’s so engraved in our heads to always be wanting more and more and more… This is fine to an extent because it does help us to reach new goals, but again moderation.