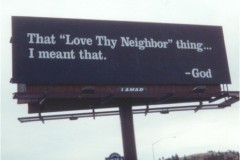 The controversy is high right now as it usually is. It seems to be centered around bathroom usage. A lot of people are for transgender bathrooms, but a lot of people are against it… Hmmm now this brings the question who is right?

Looking back at our past as a country… We at one point believed in segregation- People were convinced that using the same bathroom or drinking from the same fountain was somehow awful… They also believed that black and white shouldn’t have wedded bliss… Really the list goes on. Thankfully we have since moved on from this crazy way of thinking (there are still those that believe this is somehow awful) These are the people that I pray for because they need to open themselves up to the possibility that change is good.

As we also move forward to woman’s rights… There was a time that a woman was supposed to stay home and have babies and listen to the man (white man). That a woman shouldn’t vote because there was just no way that a woman could possibly know what she was talking about… Now, thankfully we have made huge changes in this way of thinking…

Moving forward to “gay marriage” the ever sinful gay marriage… How is it that this could possibly be okay. What is wrong with our country that we would allow 2 people that love each other this happy bliss… THANKFULLY we have passed this law that allows people the right to live the life that they want. There tends to be a lot of negativity surrounding this topic as well as the topics from the past.

The problem is that people tend to fear the unknown, people are creatures of habit, and then there are those that want to bring the bible into this argument. I am a God loving person he is present in my home and the things that I do. However, I know that there is no way that the God that I love and follow would have a problem with 2 people expressing there love for one another. This is NOT one of the 10 commandments!

LOVE THY NEIGHBOR is in the bible. It doesn’t say love thy neighbor that looks and acts like you….

How about something called compassion…

This brings me to the transgender bathroom usage… Here’s the thing ladies: if a man wants to rape you he is going to! Just because a man is in priest clothes doesn’t make him holier than though… Are you walking your children in to those places… what about school are you checking up on your child’s teachers? I mean because there have been a lot of cases that involve teachers and students, a lot of cases that involve priests and children, there are also a lot of cases where molestation happens mostly with people that you know… are you checking up on those cases???

Maybe instead of looking at this as a huge problem for women… Which its not, this law affects our children. If there is a 12 year old girl that I identifies herself as a boy is it fair that she has to use a bathroom that she is uncomfortable using? Should she be shamed by the girls in the bathroom because she doesn’t fit the mold? Take a step back people and realize that if it were your child that was feeling the way that these people are feeling you wouldn’t be making jokes about it.  What if you had a child born with both male and female parts? IS this child a mistake? Should this child be condemned?

It’s this same way of thinking that makes it hard for individuals that are different than the mold that you set forth.

We are supposed to show compassion for people. Our GOD is a loving God! He doesn’t shun you because you don’t fit the mold. He welcomes us. We are all sinners! We are all in need of help! We all make mistakes! He doesn’t! The bible wasn’t just written by him…. The bible has somethings in it that are not humane practices. The bible was also written by men… men as we all know aren’t always right…